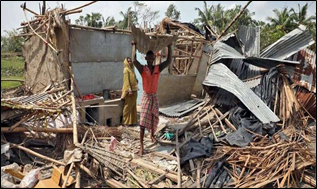 Caption of Photo: Source of Info

Officials feared that Cyclone AMPHAN would be the deadliest storm in Bangladesh since Cyclone Sidr (2007) which killed approximately 3,500 people. The India Meteorological Department (IMD) predicted a storm surge as high as 5m (16ft). Since then, over one million people were affected across nine districts in the divisions of Khulna and Barisal, causing at least 26 deaths. Damaging effects began in Bangladesh prior to the landfall of AMPHAN as coastal water levels rose, causing an estimated BDT৳11 billion (USD $130 million) in total cyclone damage. Collapsed embankments led to the inundation of 17 villages across Galachipa, Kalapara, and Rangabali District of Patuakhali in Barishal Division. Winds in Satkhira District topped out at 151 km/h (94 mph). Nearly 220,000 homes were damaged, of which 55,667 were destroyed, rendering an estimated 500,000 people homeless, according to the United Nations Office for the Coordination of Humanitarian Affairs. Low-lying areas in Barishal were submerged 0.9–1.2m (3–4ft) under water. Flooded rivers affected parts of Rangabali and Galachipa Upazilas in the Patuakhali District and parts of Khulna and Bagerhat Districts.

According to the information of the Department of Fisheries and Ministry of Agriculture, Boro rice paddies, beans, fish firming were damaged, which estimated to 149,000 hectares of agriculture lands and fish farms with an estimated worth of BDT ৳ 3.25 billion (USD $ 38 million) were damaged and millions of trees were uprooted. These losses were most significant in Khulna and Barisal Divisions where floods severely damaged or destroyed around 3,000 shrimp and crab farms and 22 million without power, representing 60% of the country’s electricity customers due to Amphan.

This proposed emergency response intervention aims to address emergency relief and health needs of the affected families by providing aliments and non-aliment items. With CIS, A-PAD Bangladesh chose Golachipa Upazila, Patuakhali District and Sadar Upazila, Bagerhat District as the direct beneficiary from the distribution of emergency food packs, plastic tarpaulin (Tirpal) for emergency house roof repair, and ORS powder to combat diarrhea / dehydration. Both are coastal communities that were along the destructive path of Amphan, where a large number of Boro rice paddies fields, fish farms, and houses were damaged.

Brief Description of the Activities:
Patuakhali and Bagerhat Districts are coastal areas of Bangladesh, which were the most affected areas by Amphan; as the flood protection embankment broke, huge amount of crops were destroyed, fish farms were damaged, and thousands of families became homeless in a matter of days, along with the increase in diarrheal patients.