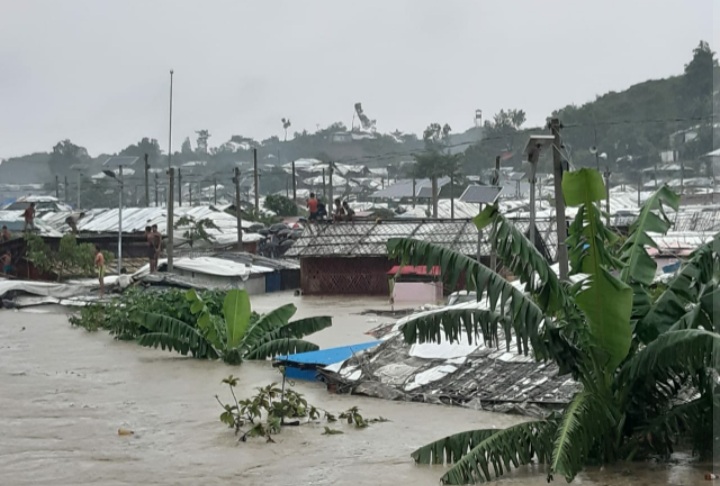 South-west Monsoon has caused heavy rainfall in the Cox’s Bazar district. Thousands of infrastructures have been
damaged due to the adverse weather. The world’s largest makeshift city now faces several counts of life-threatening
challenges. Due to the heavy showers, flash flood, landslides, water logging, disrupted connection in local accessibility
network, and several other problems have occurred in the district. Flash floods and landslides pose a serious threat in
Ukhiya and Teknaf areas where the families in the Rohingya camps have been forced to abandon their houses and seek
safe shelter in nearby makeshift and comparative high open spaces. In addition, three unions of Ukhiya sub-district and
two unions of Teknaf sub-district including Palongkhali, Rajapalong, Jaliapalong and Whykong have been submerged
due to heavy rainfall and approximately 16 camps are affected. The floods had come amid a strict national lockdown as
Bangladesh battles rising infections and deaths from COVID-19. They also follow huge fires that tore through the camps
in March, killing 11 people and destroying thousands of shelters then again the adverse weather, latest landslides and
floods further exacerbate the suffering and massive humanitarian needs of the Rohingya refugees in Bangladesh.

Cyclone Yaas relatively strong and very damaging cyclone that made landslide and flood both in Bangladesh and India.