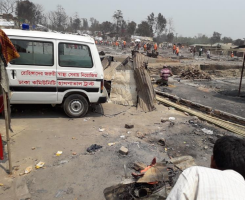 Response to Fire at Rohingya Camp

The refugee camps at Cox’s Bazar area of Bangladesh accommodate over a million  Rohingyas who fled the military crackdown in the Rakhine province of Myanmar  in 2017.

On Monday, March 22, 2021 a massive cloud of smoke came out of the Balukhali  Rohingya camp at Ukhiya in Cox’s Bazar. The fire killed several people and  destroyed thousands of homes. The fire also left Balukhali Balibazar, the biggest  local market in the Rohingya camp, in ashes. Products worth at least Taka 50  Crore were gutted in the fire.

Government authorities and aid agencies worked throughout the night to help those  impacted and assess damages in the camps. Refugees who fled the fires are taking  shelter in various locations. Rescue efforts proved to be challenging as a result of the  presence of perimeter fencing. In some instances, refugees themselves cut through  the fence to escape the fire. Limited mobile connectivity in the camps also hampered  the ability of refugees to call for immediate assistance and contact their families. The  authorities have not yet confirmed the actual cause of the blaze, though some reports  have suggested that it may have started from a gas cylinder explosion.

Due to frequent wind flow, the fire swept through camps 8W, 8E, 9, and 10, leaving  over 10,000 infrastructures including shelters, mosques, community centres, learning  centres, service centres, learning facilities, shops burnt to ashes. People in adjacent  camps (5, 6, 7, 11, 12, 17 and 18) have evacuated their households too as the fire  spread and immersed adjacent areas. According to humanitarian agencies and local  authorities.

DCHT and CIS stands by the sufferers of Rohingya camp fire in Cox’s Bazar. DCHT & CIS primary healthcare centers were 24/7 available even in emergency situation to  provide health service in this fire disaster. But the effects of this lethal and destructive  blaze will only exacerbate critical needs and further strain already overstretched  resources. With the start of the monsoon looming, rebuilding is critical. An advance  team from Dhaka already reached to the effected place to join the emergency team  for monitoring the rapid response management.

∙ DCHT & CIS continue to provide healthcare service by its static primary health  care centers.
∙ DCHT & CIS in a rapid move established emergency medical team to provide  basic first aid support to the injured and all kind of affected people at the safe  shelters by its mobile clinics proficient team.
∙ DCHT and CIS ambulances and medical teams are responding to injuries and to providing mental health and psychosocial support to the victims.
∙ Tarpaulins have been distributed as emergency shelter support with emergency  shelter kits- mosquito net, charger light.
∙ Food assistance and safe drinking water provision enabled to the affected  people
∙ COVID awareness and safety measure- delivering mask and hygiene kit to  affected patients.
∙ DCHT and CIS are conducting all rapid emergency crisis response activities with  the coordination of local government authorities to ensure safety for all.

DCHT and CIS response will continue in the coming days as fire affected community  will need our extended support.

Cyclone Yaas relatively strong and very damaging cyclone that made landslide and flood both in Bangladesh and India.